The theory of private credit money accommodation carves out a major driving force that explains the way in which the modern credit money system has changed its shape throughout the previous centuries. What we know as public money today is not so much “fiat money”, a token that has been turned into money ex nihilo through state power and a legal act. Rather, contemporary state money consists of debt instruments that historically emerged through private innovation, for a while existed as private “shadow money” next to established forms of commodity money or public credit money, and only later were accommodated during a financial crisis.

The accommodation theory is a rethink of the fiat money concept. It views public money today as accommodated private credit money of the past.

Bank notes, deposits, money market fund shares and overnight repos make up what we can understand as the public money supply today. The lasting accommodation of a private credit money form takes place in the centre of the global financial system and subsequently spreads to the periphery.

The 2007-9 Financial Crisis was an accommodation of shadow money instruments that had been on the rise since the 1970s. The crisis interventions have defined a new role of public institutions in the credit money system.

Private credit money accommodation is a process that repeats itself throughout history. It can be depicted through a two-phase model using the analytical tool of the ‘Money Matrix’ (Pozsar 2014). In the first phase, a new form of private credit money emerges. In the second phase, it is accommodated into the public money supply.

According to the Money Matrix, the money supply at a given point in time is made up of both public and private credit money forms. 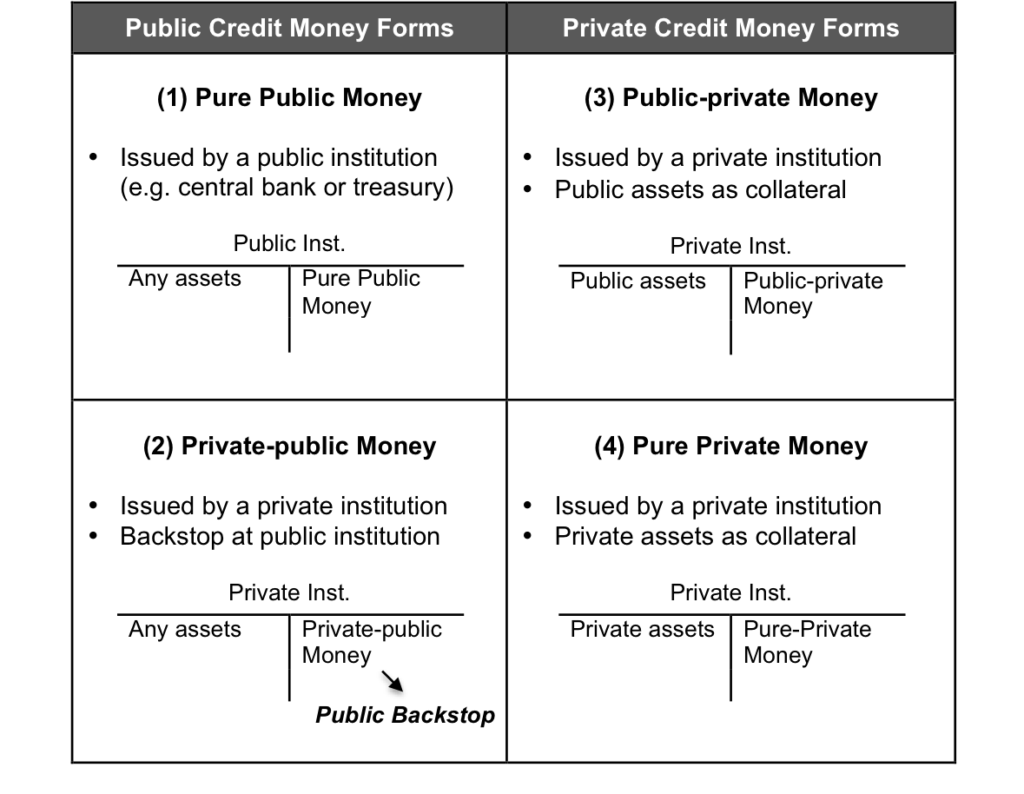 In Phase I (‘pre-accommodation’), existing credit money forms increase in volume and new forms of private credit money come into being due to financial innovation. A new debt certificate (IOU) ‘enters’ the Money Matrix: It becomes pure private money if issued against private assets or public-private money if issued against public assets. The duration of this pre-accommodation phase cannot be determined with certainty, but it makes sense to think of it as an institutional evolution that stretches well over decades.

A given credit instrument has to satisfy four criteria to be considered a systemically relevant private credit money form: First, from a supply side perspective, it must be a short-term IOU that is held by the issuing institution as its liability and that has been created on the basis of a swap of IOUs of different maturities. Second, from a demand side perspective, this short-term IOU is held as an asset by agents who consider it ‘cash’, i.e. the most liquid form of an asset capable of doing immediate purchases of commodities or other financial assets. Third, the IOU constitutes a promise to pay higher-ranking money to which it trades at par or quasi-par and in which it is instantaneously or almost instantaneously convertible. The aspect of par clearance vis-à-vis higher-ranking money forms is what ultimately makes the IOU ‘money’ in the sense of being part of the Money Matrix. Fourth, from a systemic perspective, it is systemically relevant if its default would lead to a systemic crisis and an implosion of the wider credit money system. 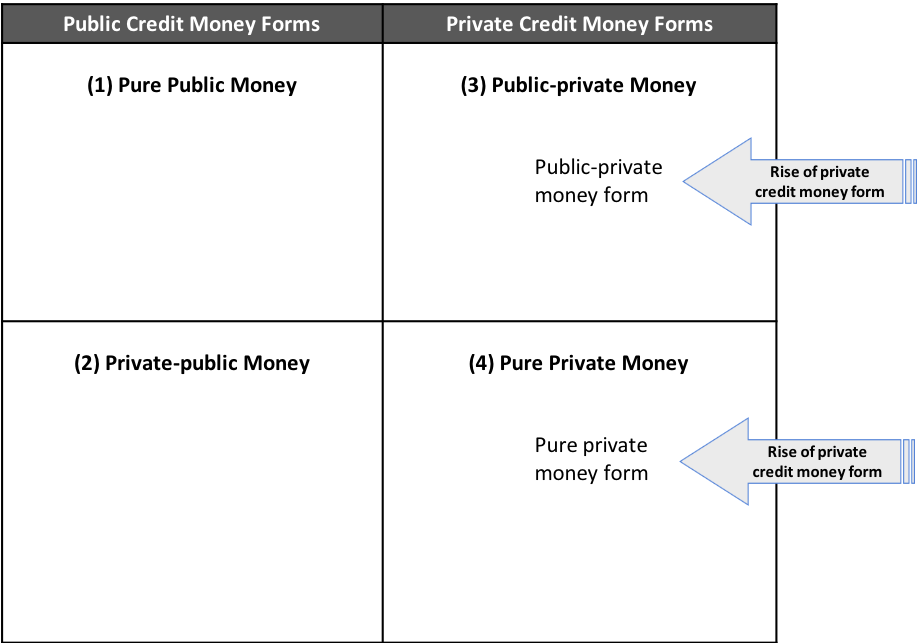 Confronted with such a run, policy-makers face the pressure to rescue the defaulting private credit money issuers. Responsibility for the emergency response to the systemic crisis sooner or later ends up at the highest levels of government where the people in charge have to decide under extreme time pressure and uncertainty. High-level politicians are confronted with a doomsday scenario: The default of those institutions would imply that masses of wealth created prior to the crisis and now held as credit money balances would annihilate. To avoid these consequences, policy-makers establish mechanisms to provide liquidity and solvency support to the defaulting institutions. This calms down the panic in the monetary system and rescues the issuers of the systemically relevant credit money form. 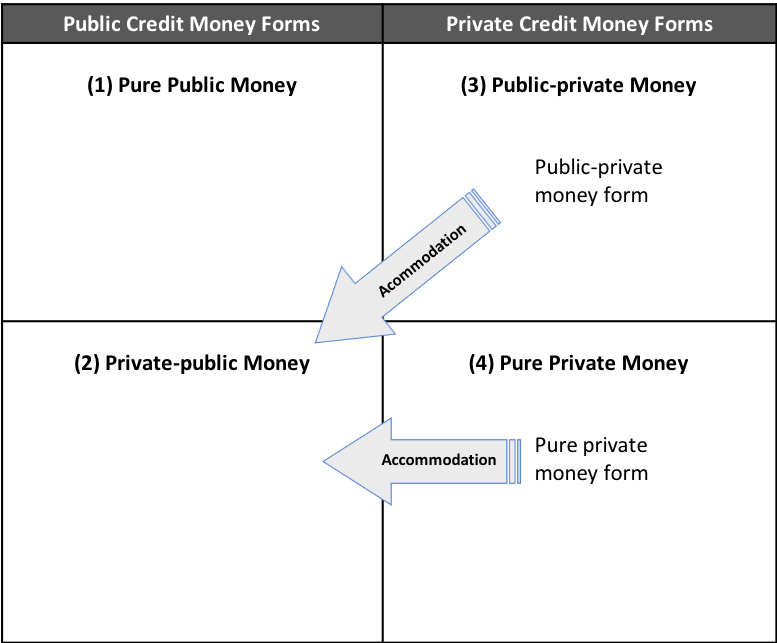 There are three manifestations of the two-phase model that led to a permanent accommodation of private credit money. Each instance of accommodation was followed by fierce debates about monetary theory and the right strategies to deal with the accommodated credit money form.

Phase I ('pre-accommodation'): Bank notes as private credit money form developed throughout 18th century Britain. Main suppliers were the Bank of England (founded in 1694) and country banks, which developed from 1750 onwards. During the ensuing first wave of the Industrial Revolution, the number of country banks as increased sharply and the volume of circulating country bank notes expanded massively. Country banks were the “shadow banks” of the age.

After the accommodation, various parliamentary committees analyzed and debated the status of bank notes, and tried to come to grips with that credit money form. The regulatory process took until the Bank Charter Act of 1844 which turned bank notes into pure public money. The Act re-defined bank notes as mere gold certificates and made their issue based on government law. Private note issue by country banks was prohibited, the Bank of England was split up into a Banking and an Issue Department. While the Banking Department continued with its classical banking operations and kept up its activity of private credit money creation in the form of bank deposits, the Issue Department became effectively a government agency with a nation-wide monopoly of bank note issuance. Accordingly, new tools for governing the bank note supply were invented. The role of bank notes as credit money under government control successively spilled over to other states in Europe and North America. 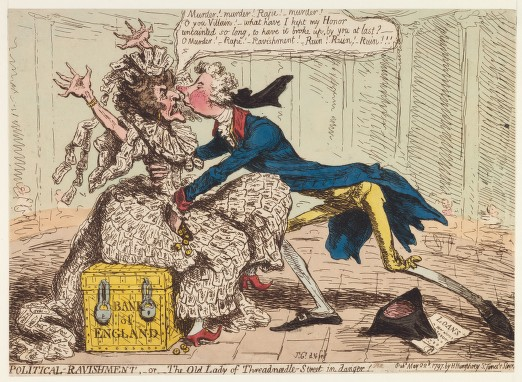 Phase I ('pre-accommodation'): Bank deposits have existed even longer than bank notes. Yet, they became systemically relevant as a private credit money form only after the accommodation of bank notes when they began to trade at par to bank notes and commodity money. In the U.S., the number of banks and especially deposit-issuing trust companies (the shadow banks of the age) increased sharply in the late 19th century, which made the volume of deposits in the financial system multiply. In 1913, the decision was taken to follow the British model and to put in place liquidity backstops for bank deposits by establishing the Federal Reserve, which—at this time—was still a privately controlled institution.

Phase II ('accommodation): The accommodation was initiated by the 1929 Financial Crisis. In the subsequent Great Depression, the U.S. financial system was subject to a multi-annual banking crisis, which appeared in four waves between 1930 and 1933. It could only be stopped when newly elected President Franklin Delano Roosevelt declared a National Banking Holiday and, by holding his First Fireside Chat on radio and passing the Emergency Banking Act in March 1933, announced an implicit 100% government guarantee for bank deposits. This established an ad hoc solvency backstop and turned deposits into a form of private-public money.

After the accommodation, a short regulatory process ensued and led to the Banking Acts of 1933 and 1935. These acts passed permanent regulations for deposits as a private-public money form. On one hand, they improved the public liquidity guarantee for bank deposits by re-organizing the Federal Reserve System and putting it effectively under public control. On the other hand, by bringing the Federal Deposit Insurance Compancy (FDIC) into being, they provided an explicit solvency backstop for deposits in case of the issuing bank’s insolvency. In addition, they introduced strict prerequisites regarding the regulation and supervision of banks—first and foremost the separation between commercial and investment banking. Over time, the public-private partnership for bank deposit creation with publicly provided liquidity and solvency backstops became the norm internationally. 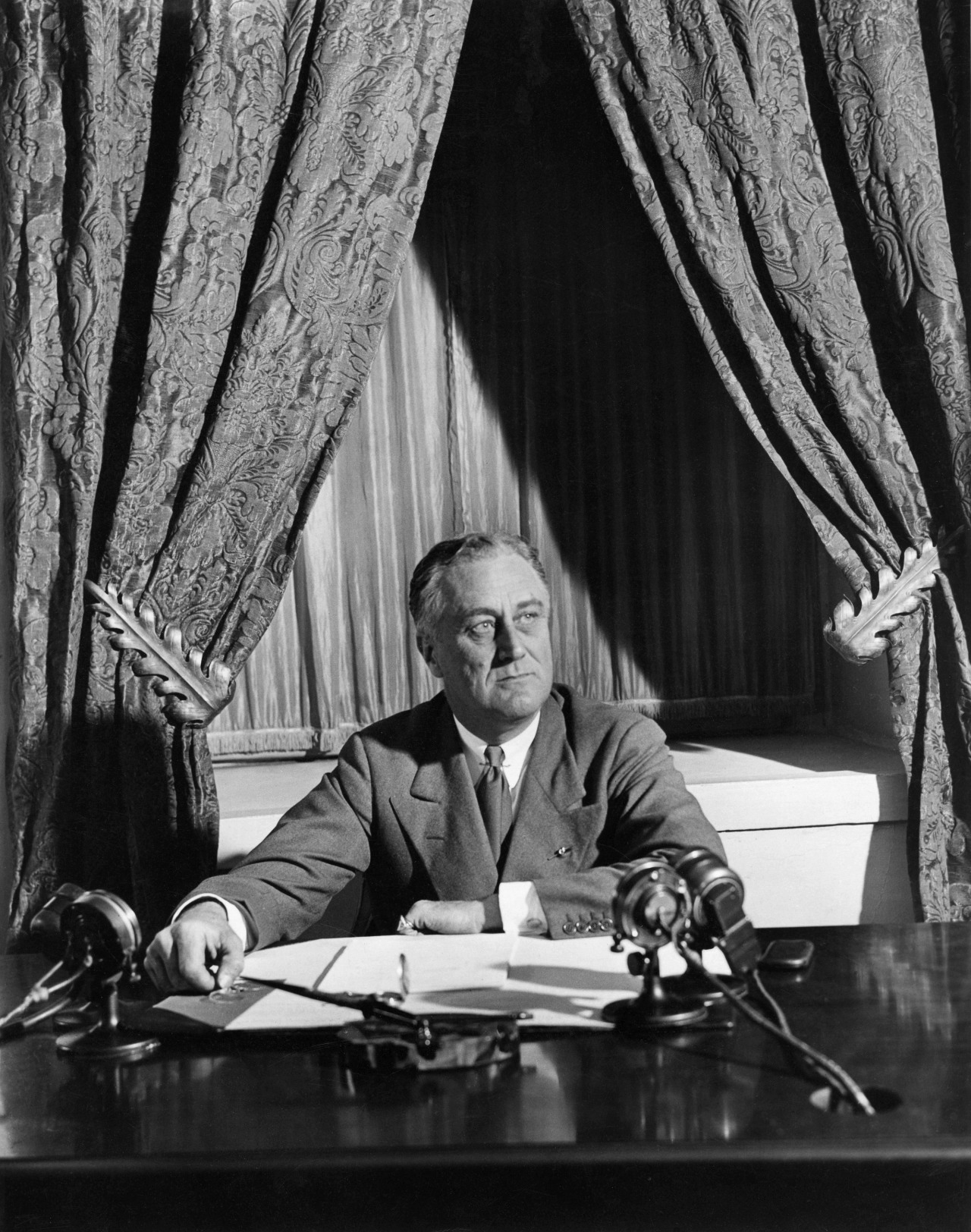 Phase I ('pre-accommodation'): From the 1970s onwards, three forms of shadow money have developed in the U.S.-based shadow banking system as substitutes for commercial bank deposits: asset-backed commercial papers (“ABCPs”), MMF shares and overnight repos. Those shadow money forms are short-term debt instruments issued by different non-bank financial institutions or ‘shadow banks’: ABCPs are the liabilities of Special Purpose Vehicles (“SPVs”)—entities set up by large commercial banks as off-balance-sheet institutions to conduct banking functions while circumventing capital requirements. Overnight repos are private debt instruments constructed around the sale and repurchase of securities. They are issued by Securities Dealers who act as market makers for repos. MMF shares are the liabilities of MMFs, which pool the funds of households and institutional investors on the retail money market to invest them in the shadow banking system. Government MMFs invest only into government securities, whilst Prime MMFs buy predominantly private debt.

Phase II ('accommodation'): The accommodation of shadow money took place during the 2007-9 Financial Crisis. While ABCPs were demonetized in the first wave of the crisis due to the Federal Reserve’s intervention in autumn 2007, MMF shares and overnight repos became private-public money in 2008. During the second wave of the crisis, around the near-failure of Bear Stearns in March 2008, the Federal Reserve used its emergency powers to establish the Primary Dealer Credit Facility (PDCF) and the Term Securities Lending Facility (TSLF) which jointly functioned as a public liquidity backstop for repos issued with high-quality government debt as collateral. In September 2008, during the third wave of the crisis associated with the collapse of Lehman Brothers, this liquidity backstop was extended to repos with lower quality collateral. At the same time, the U.S. Treasury established an ad hoc solvency backstop for MMF shares by announcing its ‘Temporary Guaranty’.

After the 2007-9 Crisis, a regulatory process set in which confirmed the accommodation of overnight repos and Government MMF shares but de-monetised Prime MMF shares. The latter dates back to a decision of the Securities and Exchange Commission taken in 2014 which prohibited Prime MMF shares from keeping up the constant net asset value for its shares and thus forced MMF shares to break par vis-à-vis bank deposits. Although the explicit emergency backstops for Government MMF shares and overnight repos were removed in 2010, they still remain in place as implicit guarantees. In addition, the Reverse Repo Facility functions as a permanent discount window for repo-issuing securities dealers. However, the process of medium-term regulation of contemporary shadow money can be seen as ongoing, and in terms of monetary governance tools, while authorities are still navigating on sight, various ideas circulate as blueprints in the discourse on contemporary shadow money. 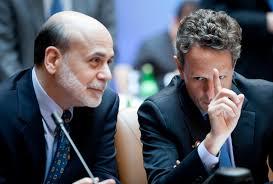 The international monetary system of the 21st century is a privatized offshore US Dollar system. This arrangement has gradually evolved since the 1950s and replaced the state-planned Bretton Woods System when it collapsed in the 1970s. Today, international monetary affairs are primarily organized through private banks and shadow banks that use the US dollar as the unit of account and operate offshore, outside of the reach of established monetary institutions.

The European Monetary Union is a unique experiment in monetary history. Its initial design only made central bank money truly European, but left commercial bank and shadow bank money predominantly national. After a decade of smooth sailing, it entered into crisis mode in 2009 and has never fully recovered. Through endogenous change and political interventions, it now has an architecture that nobody has planned. It is continuously transforming and difficult to govern.